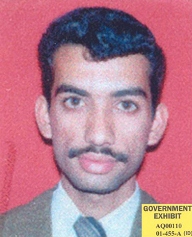 Ammar al-Baluchi is a Kuwaiti national and the nephew of Khalid Sheikh Mohammed. He was captured alongside Walid bin Attash and four others on 29 April 2003 in Karachi, Pakistan, as part of an operation by the Pakistani Intelligence Bureau and a team of Pakistani rangers. According to CIA records cited by the SSCI report, al-Baluchi was initially held in foreign government custody, where he was interrogated regarding a planned attack on the US Consulate in Karachi. CIA officers sought to participate in his interrogation, although one cable, dated 2 May 2003, mentions that al-Baluchi’s “strong reticence towards the US” meant that CIA officers had to observe the interrogations via a video feed.

According to the SSCI report, Ammar al-Baluchi and Walid bin Attash both remained in foreign government “for approximately [redacted] weeks.” The word under the redaction appears to be “two”, and this would fit with other information gleaned from CIA records. On [redacted] May 2003, both men were “rendered to CIA custody and immediately subjected to the CIA’s enhanced interrogation techniques.” Elsewhere, the SSCI report cites records documenting the use of EITs on al-Baluchi between 17-20 May 2003, and on bin Attash between 16-18 May 2003. This suggests that they were rendered to CIA custody at some point 15-16 May 2003.

Al-Baluchi and bin Attash were initially held in DETENTION SITE COBALT in Afghanistan, and this is the location for the torture documented as taking place 17-20 May 2003. His fate and whereabouts after this time are unknown, although bin Attash was rendered from COBALT to DETENTION SITE BLUE in Poland on 5 June 2003. Given that the two men were held alongside each other up until that point, it is possible that al-Baluchi was also rendered to Poland.

DoD records document that al-Baluchi was transferred out of the CIA’s secret prison network and into US military detention in Guantánamo Bay on 4 September 2006, after around 40 months (1207-1209 days) in CIA secret detention. This transfer took place alongside the other HVDs in custody at that time. In the case of some other HVDs, however, CIA records state that they were transferred a day later, on 5 September 2006. Regardless of these inconsistencies in records, it does appears that all HVDs were moved out of CIA custody and transferred to Guantánamo Bay on 4 September or 5 September 2006. This final transfer was announced by President Bush, as part of a wider disclosure about the CIA’s use of secret prisons.