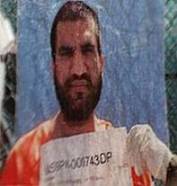 "Since they arrest me, up to today, every second night I wake up screaming, yelling and crying. I can’t forget what they did to me."

Mohammed Saad Iqbal Madni is a Pakistani national, who travelled to Indonesia in November 2001. As the Washington Post reported, Madni self-identified as a Koran reader for an Islamic radio station, and handed out business cards to advertise himself in that way. However, he also spent time with members of the Islamic Defenders Front, a legal Indonesian organisation, and was part of a conversation about concealing explosives in shoes. This conversation was picked up by the Indonesian State Intelligence Agency (Badan Intelijen Negara), and passed along to the CIA, who requested his capture for interrogation.

Madni was apprehended in Jakarta in the early hours of 9 January 2002, and detained and interrogated by Indonesian officials for two days. According to American officials speaking to the New York Times, these early interrogations demonstrated that he was a ‘wannabe’, a ‘talker who wanted to believe he was more important that he was’, and that he should be released.

He was not released, however. In the evening of 10 January, Madni has testified that he was moved to the airport in Jakarta. Speaking to BBC Radio 4, he has stated that:

‘One person from Egyptian intelligence, he come and he punched me in my chest and he grabbed me with one hand and he threw me against the wall, and at that time I got a perforation in my eardrum and start bleeding from my ear and my nose, my throat, my mouth also. And they put me in handcuffs and leg shackles they threw me inside a car and then they take me to plane, the CIA aircraft. Inside aircraft they put me inside a box, was like a wood box, and the top was with a plastic sheet. I was, can’t move my body because the shackle was very tight and very painful.’

According to Madni, he was flown to Egypt, with a stopover partway through the journey. Analysis of flight data and associated documentation demonstrates that the transfer was on board the CIA-owned Gulfstream V jet with tail number N379P. This aircraft had flown direct from the US to Egypt on 9 January, the day that Madni was arrested, before flying onwards. This is likely to be so that Egyptian officials could board the aircraft, and thus be present for his transfer back to Egypt (this would tally with Madni’s account of his mistreatment by Egyptian personnel in Jakarta on 10 January). The analysis also points towards the stopover being on the British island of Diego Garcia in the Indian Ocean. Click here for an analysis of the flight data and documentation associated with Madni’s rendition from Indonesia to Egypt.

Madni arrived in Egypt on 11 January 2002. He was told he was in Cairo, and was then imprisoned for 92 days in a basement room like a grave, measuring 6 feet by 4 feet. He was interrogated for 12-15 hours at a time on 11, 12 and 20 January. This was by Egyptian personnel, although there were also masked men in the room who were silent but who did pass written notes and questions to the interrogators. It is possible that masked men during the first two interrogations were part of the renditions crew, given that flight logs show that the aircraft N379P did not leave Cairo until 15 January. During his interrogations in Egypt, which revolved around questions about Afghanistan and bin Laden, Madni describes being subjected to electro-torture: ‘I cry and I yell. Also they give me brain electric shocks’.

On 12 April 2002, after 92 days in captivity in Cairo, Madni has testified that he was again subjected to rendition, this time to Bagram Airbase in Afghanistan (although it may have actually been to the CIA's 'Dark Prison' in Afghanistan - see below). He was taken to an office and made to sign a document declaring that he had not been tortured. He was then driven to the airport and handed over to Americans, who taped his mouth shut and loaded him onto a plane with another detainee: Mamdouh Habib. According to Madni’s witness statement, ‘for the duration of the flight Mamdouh and I were shackled in a foetal position and we were beaten and given electric shocks by the American guards if we tried to ask for anything’.

Again, analysis of flight data corroborates Madni’s account: the same aircraft as was used in his first rendition – the Gulfstream V jet with tail number N379P – flew from its home base in North Carolina, where the CIA’s operating company Aerocontractors is based, to Washington and then onto Cairo. It then flew from Egypt to Tashkent with Madni and Habib onboard. From Tashkent, Madni says that they were transferred to another aircraft for the final journey to Bagram. Flight data shows that N379P, meanwhile, returned to the US, landing at Camp Peary, the reported home of a major CIA training facility known as The Farm. Click here for an analysis of the flight data and documentation associated with Madni’s rendition from Egypt to Afghanistan.

Madni says that he was held at Bagram from April 2002 until March 2003. Another detainee, Khaled al-Maqtari, has testified that he was held in a cell in a secret Afghan prison in early 2004 which had the name 'Badr al-Madni' scratched on the wall, which may have been Madni himself. al-Maqtari believes that this prison was in Bagram, although there is other evidence to suggest it was in fact the 'Dark Prison' outside Kabul.

Whether in Kabul or Bagram, Madni says that after the first week held with other detainees, he was moved to the second floor, where he was held in solitary confinement away from natural light for seven months in a cell measuring 6x4 feet. For the remaining time, he was kept with other detainees in a small cell that he referred to as a ‘cage’, shackled, handcuffed and repeatedly moved from cell to cell (a practice deliberately designed to deprive detainees of sleep). Interrogation continued, this time by Americans directly, and he was regularly beaten and placed in the ‘strappado’ position (hanging from the ceiling with his feet just touching the ground). The focus remained a confession regarding Madni’s alleged association with bin Laden, and the lead interrogator was an Egyptian-American who was referred to as Mr Khalid.

On 23 March 2003, Madni was one of thirty detainees in Bagram who were transferred by military air transport to Guantánamo Bay. The flight had call-sign RCH191y, and passed through Incirlik, Turkey, and Portuguese airspace.

While in Guantánamo Bay, other prisoners reported that his physical and mental health was poor, and that he had multiple health problems as a result of his detention and torture. While in Guantánamo Bay, he was subjected to the ‘frequent flyer programme’, where the detainee is moved from cell to cell every 20-30 minutes, and refused any sleep. As a result of this treatment, and over six-and-a-half years of detention and abuse, Madni tried to hang himself on two occasions, and went on hunger strike three times. After one suicide attempt, he was placed in a refrigerated cage for six months, wearing only underwear. One at least one occasion in Guantánamo Bay, Madni has testified that he was interrogated by a British intelligence officer.

Madni was finally released on 31 August 2008. He was flown first to Islamabad on board a US military aircraft and on arrival, was admitted to a hospital in Islamabad for treatment. He was then questioned in a safe house by Pakistani officers for three weeks, before finally being driven to his family home in Lahore. As a result of his ordeal, Madni cannot walk unaided, and has suffered from debilitative psychological illness. Speaking to the BBC, he has stated that: ‘Since they arrest me, up to today, every second night I wake up screaming, yelling and crying. I can’t forget what they did to me. No one can do that with the animals. I don’t know how they can do it with human beings’.

In July 2009, the solicitors Leigh Day and Co. wrote to the Foreign Secretary David Miliband and the Commissioner for the British Indian Ocean Territory on behalf of Madni. This letter sought disclosure of material held by the UK Government, including the Commissioner, that would support allegations of his rendition through Diego Garcia, and his subsequent mistreatment in Cairo, Bagram and Guantánamo Bay.

After initially denying that it held any records of relevance to the case, and that permission for a judicial review should be refused, and just hours before the hearing was due to start on 4 March 2010, the UK Government admitted to the court for the first time that ‘the defendant has possession of documents which have a bearing (to use a neutral phrase) on whether any British or American authorities were mixed up in any wrongdoing against the claimant’. These documents were claimed to be classified, and the Government argued that the case should be heard in secret, with a security-cleared ‘special advocate’ representing Madni. The case is ongoing.

US Behind Secret Transfer of Terror Suspects
Washington Post, 11 March 2002