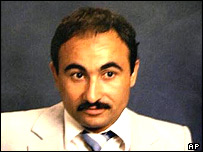 12 April 2002
Rendition to Afghanistan, via Uzbekistan

Mamdouh Habib was born in Egypt in 1955. In 1992 he bought a second home in Australia and travelled between the two countries. He travelled widely from then on, and in 2001, allegedly attended Al Qaida training camps in Afghanistan. Following the 9/11 attacks, he was advised to leave Afghanistan, so departed for Kandahar, via Kabul.

In October 2001 he was captured by Pakistani authorities, and he alleges that US agents were also involved. He was held in Quetta and alleges that he was tortured by the Pakistanis, with electric shocks, beatings, suspension from chains, and being made to stand on an electrified drum while being shackled to a wall.

US authorities claim that Habib was linked to the 9/11 hijackers and to various proscribed groups including Al-Qaida, Lashkar-e-Tayiba of Pakistan and Al Gamma Al Islamia of Australia as well as the German 9/11 cell and conspirators in the 1993 World Trade Centre bombing.  The US also claims that he had admitted during interrogations to knowing about the 9/11 attacks in advance, although assessors for his Guantánamo Detainee Assessment note that he retracted a number of admissions in subsequent interrogations.  Habib maintains that he made the confessions in the first place as a result of torture, and insists that he would have signed anything ‘to survive’.

Around the 20th or 21st November 2001, Habib was rendered to Egypt where he was held for around six months. He was interrogated and tortured repeatedly by his Egyptian captors, and insists that US officials had knowledge of this. He reported being tortured with electric prods, having his finger nails forcibly removed, being threatened with sexual assault by a dog, being forcibly injected with drugs, having cigarettes extinguished on his body, and being raped anally with various objects and gasses, as well as having his genitals electrocuted. It was during this period that he was forced to sign a confession.

On 12 April 2002, Habib was rendered, alongside Mohammed Saad Iqbal Madni, to Afghanistan, via Uzbekistan, on board the Gulfstream Jet with tail number N379P.   The aircraft flew from its home base in North Carolina, where the CIA’s operating company Aerocontractors is based, to Washington and then onto Cairo. It then flew from Egypt to Tashkent with Madni and Habib on board. From Tashkent, Madni says that they were transferred to another aircraft for the final journey to Bagram. Flight data shows that N379P, meanwhile, returned to the US, landing at Camp Peary, the reported home of a major CIA training facility known as The Farm.

Click here for an analysis of the flight data and documentation associated with Habib’s rendition from Egypt to Afghanistan.

Habib recalls both Egyptian and US officials accompanying him on the flight to Afghanistan. He was first taken to Bagram where he remained for two weeks before being transferred to Kandahar. His stay in Kandahar was also short, for on 6 May 2002 he was again prepared for rendition to Guantánamo Bay.

In Afghanistan and Guantánamo he alleges that he was subjected for multiple abuses, including sleep deprivation, pepper spray, threats of sexual assault, beatings, the use of electrical prods, water boarding, exposure to very loud music and prolonged darkness with flashing lights. In an interview with the New York Times he stated that while he was held in Guantánamo, ‘he was sexually humiliated by a female interrogator who reached under her skirt and threw what appeared to be blood in his face. He also said he was forced to look at photographs of his wife's face superimposed on images of naked women next to Osama bin Laden.’ He claims that the psychological effects of the abuse have been post-traumatic stress disorder, depression, mental distress, loss of memory, nightmares and flashbacks. Physically he suffers from scarring, burns, and sore ribs.

Habib was finally released and repatriated to Australia in January 2005.

In 2002, the Center for Constitutional Rights filed two habeas corpus petitions in the Washington DC circuit court. These were Habib v Bush and Rasul v Bush, cases that were later consolidated with other habeas corpus petitions on behalf of numerous Guantánamo detainees as Rasul v Bush. They were intended to challenge the indefinite detention, without charge, of the detainees. Despite the dismissal of the cases in the lower courts, on appeal to the Supreme Court, a ruling was made on 10 November 2003 by the Supreme Court that the cases should be heard in the US courts. The Supreme Court’s ruling led to the transfer of a number of so-called High Value Detainees out of a secret CIA detention facility in Guantánamo Bay to numerous third-party countries.  According to one US official speaking off the record, 'anything that could expose these detainees to individuals outside the government was a nonstarter', thereby necessitating their removal from Guantánamo.

Habib alleged that Australian officials were implicated in his mistreatment and torture, so sued the Australian government in 2010 (Habib v Commonwealth of Australia). Specifically, he claimed that on at least the 24th, 26th and 29th October 2001 Australian intelligence agents participated in his interrogations, and that it would have been obvious to anyone that he was being physically mistreated.  He also alleged that Australian officials encouraged his rendition to Egypt and prolonged detention through transfer to Guantánamo Bay. In December 2010, an Egyptian official provided testimony which confirmed that an Australian agent had been present when he was tortured in Egypt. In December 2010, the Australian government signed an out-of-court settlement with Habib, the details of which remain a secret, in order to bring a halt to the legal proceedings.