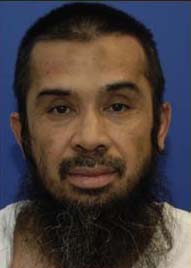 Hambali (also known as Riduan Isamuddin) is an Indonesian citizen who was captured on 11 August 2003 in Ayuttaya, a Thai city 50 miles to the north of Bangkok, by a joint force of Thai and US security forces. The US Government accuses Hambali of being the operational commander of Jemaah Islamiyah (JI) and a lead member of al-Qaeda responsible for multiple bombings in Southeast Asia, including the Bali bombings of October 2002 which killed over 200 people. He has been classified as a ‘High-Value Detainee’ (HVD), and was held for over three years in secret detention before being transferred to Guantánamo Bay in September 2006, where he remains.

Hambali was initially held in US custody in a secret location in Thailand for 3-4 days, during which time he has testified that he was made to stand in a stress position with his hands cuffed to a hook in the ceiling, and kept naked, blindfolded and with a sack over his head.

At some point between 13-14 August 2003, Hambali and Lillie were both transferred from Thailand to CIA custody in Afghanistan, onboard a privately-owned Gulfstream IV jet, registration number N85VM, which had been contracted by the CIA through its outsourcing of rendition support services to DynCorp. En route, the aircraft landed in Sri Lanka for refuelling with the two detainees on board. Click here for our analysis of the flight data and documentation associated with Hambali’s rendition from Thailand to Afghanistan.

It was at this point that Hambali entered CIA custody, and was, according to CIA records cited by the SSCI report, almost immediately subjected to “enhanced interrogation techniques”. There are no declassified records detailing the torture of Hambali, although there are cables recording the fact that he later recanted the information he provided under torture, which he gave “in an attempt to reduce the pressure on himself... and to give an account that was consistent with what he assessed the questioners wanted to hear.” An Indonesian-speaking debriefer later suggested that Hambali had not in fact been resistant to initial questioning (the rationale for deploying EITs) – his poor English language skills and cultural norms dictating his answers instead. Hambali himself has testified that he was kept naked for most of the first six weeks of his detention in Afghanistan. Clothes were provided during the second week, but then removed again. He has also said that he was beaten repeatedly, with his interrogators placing a thick collar around his neck and then slamming him against walls.

The fate and whereabouts of Hambali after the initial six weeks of his detention in Afghanistan is unclear. Indeed, the only fact which has been made public regarding Hambali’s treatment after Afghanistan comes from his testimony to the International Committee of the Red Cross, where he states that in his third place of detention ‘he was threatened with a return to previous methods of ill-treatment (namely, having his head slammed against the wall by use of a collar), by his interrogators showing him the collar during interrogation sessions’.

Some reports have suggested that Hambali was held on the British island territory of Diego Garcia at some point after his capture, with Time magazine running a story in October 2003 which cited a ‘regional intelligence official’ to this effect. Indeed, the Council of Europe’s Rapporteur investigating European complicity in US renditions and secret detention – Dick Marty – claimed in his 2007 final report that ‘we have received concurring confirmations that United States agencies have used the island territory of Diego Garcia... in the “processing” of high-value detainees’. The UN Special Rapporteur on Torture, Manfred Novak, also claimed in 2008 that he had ‘received credible evidence from well-placed sources familiar with the situation on the island that detainees were held on Diego Garcia between 2002 and 2003’. However, neither Marty nor Novak named any detainees in particular, and there is little in the way of concrete evidence to suggest that Hambali was among those who may have been detained on the island. In particular, the Time story is based largely on records obtained of Hambali’s interrogations on 22 and 26 August, and it is likely that these were in fact from his detention in Afghanistan.

Hambali has also been cited by the Associated Press’ Adam Goldman as having been detained in Morocco and then Romania during 2004 and 2005, although again there is little in the way of detailed evidence in the public domain to support such assertions. Click here for further analysis of where the HVDs – including Hambali – may have been held during 2005-2006.

Both DoD records and the SSCI report document that Hambali was transferred out of the CIA’s secret prison network and into US military detention in Guantánamo Bay on 4 September 2006, alongside the other HVDs in custody at that time (all of whom appear to have been moved out of CIA custody  and transferred to Guantánamo Bay on 4 September or 5 September 2006). This final transfer was announced by President Bush, as part of a wider disclosure about the CIA’s use of secret prisons.