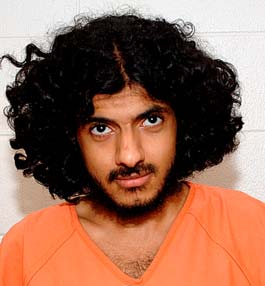 Hassan bin Attash is currently a detainee in Guantánamo Bay, and spent two years prior to this disappeared within the US secret prison network. He is the brother of another detainee in the prison, Walid bin Attash, a ‘High Value Detainee’ accused of being a senior member of al-Qaeda. Hassan bin Attash is accused by the US Government of being a member of bin Laden’s security detail, and working closely with senior level al-Qaeda operatives. They claim that he is a close associate of Abd al-Rahim al-Nashiri, accused as a high-level member of al-Qaeda and a ‘High Value Detainee’ also currently detained in Guantánamo Bay.

Bin Attash was captured in Karachi, Pakistan, on 11 September 2002, during multiple raids by Pakistani forces on ‘al-Qaeda safe houses’ in the city. Several other people were captured in these raids, including Bashir al-Marwalah, Abdul Rabbani Abd al-Rahim Abu Rahman, Mohammed Ahmad Ghulam Rabbani, and the ‘High-Value Detainee’ Ramzi bin al-Shibh. All are still being held in Guantánamo Bay.

At the time of capture, bin Attash was only 16 years old. Once captured, he was held in a Karachi prison for 3-4 days. According to an account provided by the detainee to his legal team, he was interrogated while blindfolded by a team of about a dozen Pakistani and American officials. During questioning, he was punched in the face and stomach, hit with a stick, and deprived of sleep.

Analysis by The Rendition Project and the Bureau of Investigative Journalism confirms that bin Attash was transferred to CIA custody between 14-15 September 2002, likely as part of a group of prisoners who were taken to the CIA-run DETENTION SITE COBALT in Afghanistan. Here, according to the account provided to his lawyers, he was held in total darkness and continuously blasted with heavy-metal and rap music. He was subjected to a cycle of interrogation and positional torture: first he would be taken to an interrogation room where he would have bright lights shone into his eyes (having been kept in total darkness), and be interrogated naked with his wrists chained behind him to a wall. He was also sprayed with cold water during these sessions, which lasted 30-60 minutes. He would then be returned to his cell, and hung by his wrists from a bar above his head with his toes just reaching the floor (the so-called ‘strappado’ position). This, he says, was like being stretched on a medieval rack, and was ‘so painful that no one put in this position could stand it for even a moment’. He would be left there for 6-8 hours, before being brought back for further interrogation. This cycle went on for the 2-3 days he was held at this site.

Bin Attash was then rendered to Jordan, along with Ramzi bin al-Shibh, who was likely taken onwards to Morocco. Analysis of flight data held by The Rendition Project demonstrates that bin Attash and bin al-Shibh were rendered on 17 September 2002, on board the CIA-owned Gulfstream V jet with registration number N379P.

According to bin Attash, he was detained in the GID (Jordanian intelligence) Headquarters in Wadi Sir, Amman. During this time, he was also detained alongside Ali al-Hajj al-Sharqawi (‘Riyadh the Facilitator’), who had also been captured in Karachi (albeit seven months earlier, in February 2002), detained in Afghanistan and rendered to Jordan. Bin Attash was held in the GID facility for 16 months, and tortured repeatedly, including in the presence of Americans. Bin Attash’s testimony, transcribed by his legal team, provides an account of his torture in Jordan.

The Jordanians tortured Hassan mercilessly, slapping and punching him, and making him lie down and stepping on his body and face. They also dragged him through the hallways to prevent him from sleeping. Hassan told counsel that the sleep deprivation was one of his worst tortures, making him almost crazy. The Americans have cruelly called this form of torture the “frequent flyer program.

Hassan suffered other tortures in the Jordanian prison. Sadistically, Hassan’s keepers would lie him on his back, raise his feet above his head, secure his legs on a horizontal bar, and thrash the soles of his feet until they were raw, and afterward force him to stand in a pile of salt half-melted by hot water. Hassan has told counsel that he felt as though he was walking on hot coals, and that eventually he actually tasted salt.

A habeas corpus petition filed in US courts regarding his detention in Guantánamo Bay (05-cv-1592) claims that bin Attash was tortured for 12 hours each day, for a period of three months. Another detainee held in the facility at the same time, Abu Hamza al-Tabuki, has provided testimony seen by Human Rights Watch that bin Attash was held in cell number 85, on the third floor of the facility, and that ‘the guards didn’t allow [him] to sleep. The guards would look in on him through the small window in his cell door. If they saw that his eyes were closed, they’d wake him up by slapping his face or spraying water on him’. According to another of his lawyers, Robert Knowles, bin Attash was also threatened with electric shocks. ‘He says that he told them whatever they wanted to hear. He just wanted it to stop’.

On 8 January 2004, after 16 months in Jordan, bin Attash and al-Sharqawi were returned to Afghanistan, and held in the ‘Dark Prison’ in Kabul. Analysis of flight data held by The Rendition Project demonstrates that they were rendered on board the CIA-owned Boeing 737 with registration number N313P. According to his lawyer, bin Attash recalls being taken from GID to the airport ‘where he was met by CIA officers who were dressed in black, and were wearing black masks with forehead flashlights’.

Bin Attash and al-Sharqawi were detained in the Dark Prison alongside several other men, one of whom – Khaled al-Maqtari – has provided a detailed list of who was detained in each cell during the first few months in 2004, along with a floor plan of the facility. This list is similar to the one provided by Mohammed al-Shoroeiya and Khalid al-Sharif in interviews with Human Rights Watch, as well as details provided by Mohamed Bashmilah. Drawing on this information, it is possible to surmise the detainees in the prison in early 2004.

Detainees in the Dark Prison, 2003-2004 (aliases by which they were known while at the site in brackets):

According to al-Maqtari, Majed al-Maghrebi – who was in the cell next to his – managed to speak to him during a break in the ‘excruciatingly loud’ music, and told him that bin Attash was also in the prison, and had been ‘tortured horribly’ in Jordan.

While in the Dark Prison for a second time, bin Attash was subjected to the same forms of torture as before. Analysis by The Rendition Project and the Bureau of Investigative Journalism has established that he was moved out of CIA custody, at some point 4-14 May 2004. This was likely to Bagram Airbase in May 2004, likely alongside three other detainees he was held alongside: al-Sharqawi, Binyam Mohamed and al-Kazimi (all of whom were transferred from Bagram Airbase to Guantánamo Bay with bin Attash in September 2004). Indeed, Binyam Mohamed has testified that he was moved from the Dark Prison to Bagram in May 2004, and that he was transferred by helicopter with other detainees ‘tied like hens going for slaughter’.

In Bagram, bin Attash continued to suffer physical and psychological abuse, including regular beatings, stress positions and sleep deprivation. He was also threatened with being mauled by dogs, and with electrocution. In Bagram at the same time were Abu Rahman and Rabbani (both of whom had been captured with bin Attash two years earlier). The exact whereabouts of the last two men during the intervening time are unclear, although leaked US military documents state that Abu Rahman spent two months in Pakistani detention, followed by seven months in Kabul, and then time in ‘another prison’.

Bin Attash, along with the five detainees discussed here and three others, were transferred to Guantánamo Bay on 19 September 2004, on a US military aircraft with call-sign RCH948y.

Hassan bin Attash has remained in Guantánamo Bay ever since, where he says he has continued to suffer abuse.

Jordan: “Your Confessions are Ready for You to Sign”
Amnesty International, July 2006